"A Pound of Whatever Silver He Pleases": History and Economy in the Late Medieval Eastern Mediterranean from the Lora Robins Gallery Coin Collection

Coinage was, in the Middle Ages, more than just currency. It was also a source of profit and power. As a result, coins from this period are particularly useful in understanding the interconnectedness of the medieval world and its various conflicts. Combining history and numismatics, this exhibition traces the political and economic developments of the thirteenth and fourteenth century eastern Mediterranean. Through a close examination of 53 unique coins, mostly in silver, from a number of the politically and economically important regional entities during the period, the exhibition utilizes monetary history to tell the story of the Mediterranean at a tumultuous point in its past.

The thirteenth and fourteenth centuries in the eastern Mediterranean were ones of profound shift for the region, which is reflected in the coinage. The conquest of Constantinople in 1204 by the soldiers of the Fourth Crusade marks the opening date of this study, as western European influence in the area rose to its height as a result. However, less than a century later, the Latin presence in the East was diminished through the fall of Acre and the loss of the Crusader States in 1291. Despite these political setbacks, the West still had a deep connection to the economy of the eastern Mediterranean, evident in the coinage of the time. The slow collapse of the Byzantine Empire, from the fall of Constaninople in 1204 to the recapture of the former capital in 1261, and even its harassment from the rising Turkish power in the region, materializes during this time. While these decisive events can be traced in other areas of study, the coinage of the Byzantine Empire from the period, while scant, informs on the profound impact of these calamities on the Empire. But, particularly for the Muslim world, this was a period of invasion. The entrance of the Mongols onto the political stage, as well as the decline and destruction of traditionally powerful political entities during these two centuries, marks a dramatic shift in the power structure of the Middle East. These changes are also made clear through the coinage of the period.

Coinage is often neglected when determining the history of a place or a power despite its real historical impact and its ability to formulate new narratives of the past. Coinage speaks on issues of politics or economy because of its role in trade, power projection, and art. Tracing the changes of this region through its coinage offers a fresh look at the eastern Mediterranean in the thirteenth and fourteenth centuries. While this collection does not claim to be all encompassing, these representative examples can shed light on the history of the region.

This exhibition is organized in honor of Joseph S. Laposata.

Trade Routes of the Mediterranean

This map, created and modified for the purposes of this exhibition by Martin Jan Månsson, depicts the major trade routes of the 11th century. Due to the realities of medieval trade, at least up to the events of 1291 and the fall of Acre, these trade routes remained largely the same through the twelfth and thirteenth centuries. As a result, they offer insight into the modes of connection in the medieval world. Additionally, they help ground the following study in the geography of the Middle Ages in which trade flourished. This particular map focuses only on the eastern Mediterranean world and the regions with which this space interacted. As such, this map examines the world from Italy to Iran in order to highlight the trade routes that allowed for such dispersal of commerce and coinage. These mercantile avenues connected different markets and political entities that differed based on religion, culture, and political ties. As such, this map provides the context needed to interpret the following coins for their significance in the wider medieval economy. 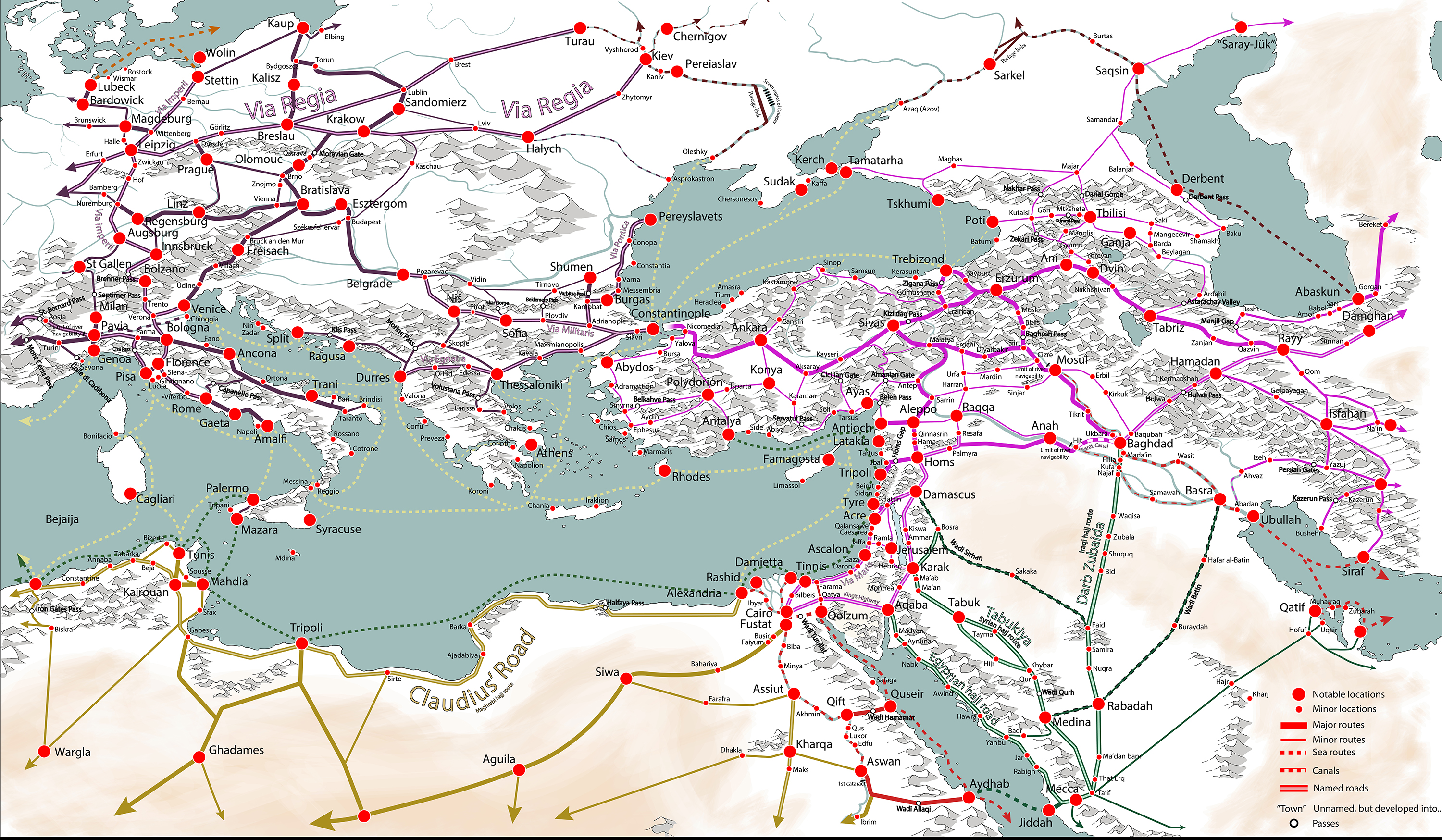 After the fall of Constantinople in 1204, the Byzantine fiscal system no longer defined the eastern Mediterranean world. Now forced under trading compacts with the Italians, the Byzantines lost much of their ability to regulate the flow of trade in the region. Despite attempts from the various successor states to gain control over the economy, the Byzantines gradually lost all authority. Their coins, at one time regional models, became less and less valuable as the state lost its power over the flow of precious metals and, in some cases, even the minting process. By the end of the period, Byzantine coinage had dropped in value, been replaced by Italian coinage, and was dispersed due to the political fragmentation of the empire. The age of Byzantine monopoly on coinage was over.

This period saw the economic domination of the eastern Mediterranean by the Italian Merchant Republics in trade as well as coinage. The Italians, working with their crusader companions, greatly expanded the flow of trade goods into Europe and increasingly controlled the flow of precious metals. After taking Constantinople in 1204, the Italians’ power rose in the Mediterranean as they came to dictate to a greater extent the terms by which trade was conducted. The various republics fought wars against one another to assert their trading privileges around the region and garnered support from political entities across the Mediterranean world to increase their profits. Their domination in trade meant their domination in coinage, and Italian coins very quickly became the standard for currency systems across the Mediterranean.

The Crusader States established across the eastern Mediterranean world were vital to the European trade economy. Their territories in Syria and Palestine, held by the crusaders until 1291, opened up trade access to the Silk Road, allowing the crusaders’ Italian partners to profit greatly. The fall of Constantinople in 1204 opened up another avenue for wealth acquisition, as the formation of the Latin Empire allowed the crusaders to dictate the terms of trade agreements alongside the Italians. Despite their involvement in trade, crusader currencies were ultimately weak. Noting a few exceptions, namely the Kingdom of Cyprus, most crusader polities produced the denier, a billon coin of little purchasing power in the eastern Mediterranean economy. Thus the crusaders were important not necessarily for their wealth, but for the access and control they created for Europeans in eastern Mediterranean trade.

The Armenians, controlling the Kingdom Cilicia, were prosperous because of their strategic location on the shores of the eastern Mediterranean. As a Christian state, the kingdom was a ready trade partner with the Italians of the West, and the kingdom’s position made them a junction point between Central Asian and Persian Gulf trade. Ayas, perhaps the most important trading port in the Armenian kingdom, became a hub of European trade. As a result, the thirteenth century saw the advent of a unique silver coin, the tram. This silver coin was of some value in the eastern Mediterranean economy. But, as the kingdom faced outward assault from its enemies, the coins became debased and its value dropped, as did the kingdom’s status in the Mediterranean trade economy.

As the territory of the Seljuq Sultanate expanded in Anatolia, they developed road systems, took ports along the Black Sea and the Mediterranean coast, and founded Alanya with the expressed purpose of trade with the West. The Turks also threatened trade routes through piracy, especially as Seljuq power in the region began to disintegrate. Seljuq coinage often followed the traditional Islamic weight standard in order to facilitate trade, but they were of a distinctively Anatolian style. The fall of the Seljuqs meant the rise of many Anatolian emirates, the most historically significant of which was the Ottomans. The Ottomans, as they moved west towards Christian lands, developed European style coinage with some obvious Islamic imagery. As they gained power, their coins were produced with a higher quality silver than those from surrounding emirates, making their coins more valuable than those of their neighbors.

The Egyptians and Levantines

The Mamluks, based out of Egypt, Syria, and the Levant, were of great importance to the trade of the eastern Mediterranean. Their access to the Silk Road cut by the Ilkhanate, the Mamluks directed trade through the Red Sea and around the Arabian Peninsula. Their assault of Christian lands damaged western influence in eastern Mediterranean trade and limited Italian and crusader access to the Silk Road. The Mamluks were also key players in linking Black Sea trade to the Mediterranean through their alliance with the Golden Horde and their reliance on the slaves from the Qipchaq Steppe. The coinage of the sultanate reflects these new trade relationships. Mamluk coins were based on those of their Ayyubid predecessors, but were generally larger, heavier, and of a better metal quality. Their copper coin, the fulus, was of various size and quality, and served the wider economy of the sultanate.

The Mongols, who devastated the lands they encountered, were of significant influence to the trade economy of the eastern Mediterranean despite their distance from it. The immense destruction that they left in their wake slowed trade along the Silk Road, but the eventual formation of the Ilkhanate and the Golden Horde stabilized the trade economy. Their control of the Silk Road allowed them to conduct economic war alongside political war, and as a result the Ilkhanate was able to effectively embargo the Mamluk Sultanate from overland Silk Road trade until the middle part of the fourteenth century. The Mongols of Persia reformed the currency system as a result of their commercial domination, introducing a strong silver dinar into the economy under Mahmud Ghazan. As the Ilkhanate began to decline, so too did their coinage such that into the fourteenth century the relative weight of the Ilkhanid dinar dropped.